YouTube campaigns are often very underestimated, it is hardly surprising, they do not directly generate conversions in such quantities as, for example, shopping campaigns. If we do not look at assisted conversions, the effects are usually not visible. However, do they really not affect our sales? Is it worth investing in YouTube from the point of view of a SEM specialist? How to create and target YouTube campaigns so they make sense and sell?

What type of campaign should I select?

If we want to focus on sales, it is worth taking an interest in video action. This type of campaign allows you to display skippable in-stream ads and in-feed video ads. This campaign was created to bring conversions. What's more, we can add sub-page links and a product data file to the campaign. We can add all the products from GMC or choose specific ones that we want to promote, which allows us to strengthen the advertising message even better. The user has a ready "button" to buy a given product.

Targeting your YouTube campaign depends on your goal, budget, and scale you want to achieve. You need to get to know the brand and the competition well to choose the right groups of recipients. So how to target a campaign to generate sales? The number of YouTube users is huge, so you would need a huge budget to hit most of them. So it's a good idea to target your ad broadly, but with exclusions. For example, we can look at sales data and see which age groups generate the least transactions and whether there is not a big difference in revenue between women and men. If we see dependencies, it is worth excluding certain age groups and deciding to target only women or only men. For example, looking at the data below, you can consider excluding the 55-64 and 65+ age groups and target the campaign only to women.

When we have exclusions, we can plan to target. We should focus primarily on:

Of course, during the campaign, you need to pay attention to the data and observe whether one of the audience groups does not work "too poorly" compared to others or whether a given group does not stand out from the rest and optimize. The data that you should look at when assessing your audience is, in addition to conversions, certainly the view rate and the number of clicks: 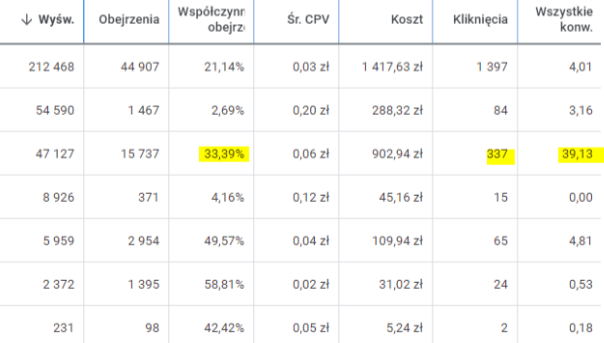 Conversions can often be assisted, and seeing your ad and clicking on it indicates interest.

Additionally, you cannot forget to create remarketing lists from YouTube for users who watched the video as an advertisement. These will come in handy later in your Search Network campaigns. As you can see below, a list from YT has a higher conversion rate than a simple remarketing list – all users.

Creating an ad on the Google Ads side is also a very important matter. You need to pay special attention to this and do ad tests with different texts. Sometimes a single headline or call to action can cause big changes in results. The results shown below are the results of a test – changing the headline in an ad. This was the only change that was made. After 5 days of the change, compared to the previous period, you can see how the number of clicks from the ad increased by approx. 132%, and the number of users by approx. 150%, at lower cost. Thanks to a better headline, interest from users has increased significantly.

What additional settings to look out for?

How to measure results and decide if YouTube makes sense?

Even with the best advertising video and YouTube campaign settings, we will not see the results that Product or Brand campaigns give us. In the case of this type of activity, we have to look at the data a little differently than we are used to in other types of campaigns. So what should we be looking at and paying attention to?

If you have a big campaign on YouTube, and no transactions or growth is seen in other sources, we can actually undermine its relevance. However, if we see it in the conversion paths, if there are assisted conversions and the revenues from organic and direct are also growing compared to previous periods, it is a good sign for us that we have a campaign that allows us to promote the brand and increase sales 😊.